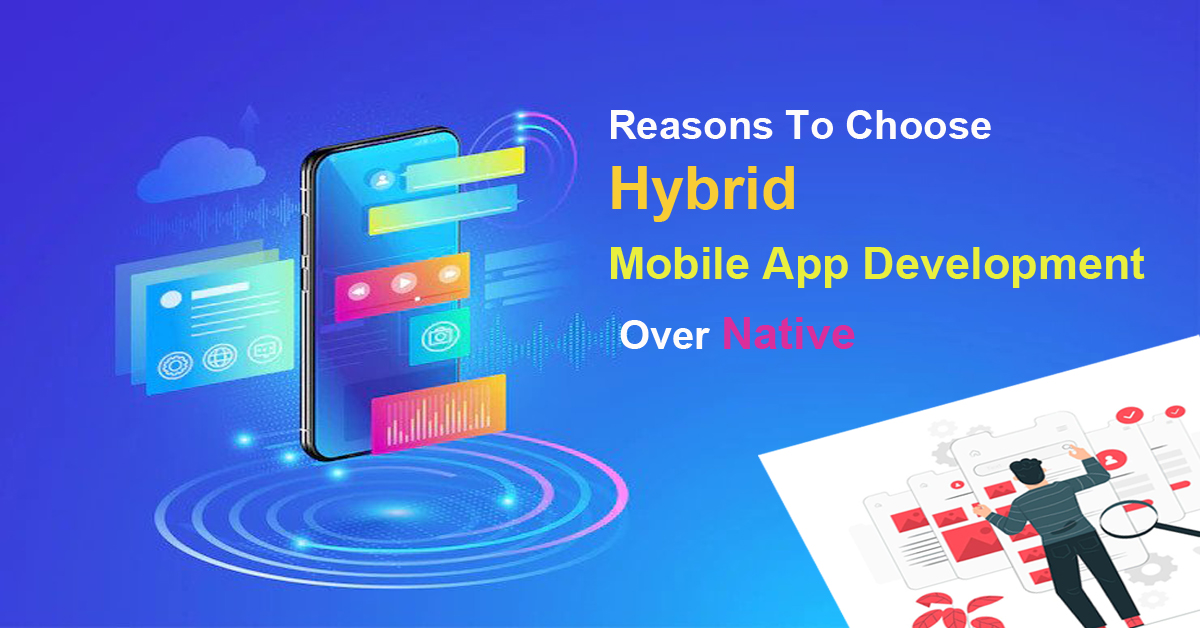 As the topic suggests, this article will dig into why hybrid mobile app development should be preferred over native. But first of all, let us understand the meaning of both types of mobile applications.

In the case of native mobile app development, Dubai's web development companies must create two separate applications for iOS and Android and upload them separately.

Hybrid mobile app development is also commonly known as cross-platform app development. It allows software design and development companies to design a single app for numerous platforms. A single tech stack and code base are sufficient for developing an app suitable for both operating systems(iOS and Android).

As native apps are separately designed for each platform, they offer the benefit of customizing everything according to the requirement and demands of the user. Moreover, as mentioned above, due to the non-usage of cross-platform tools for development, the risk of getting stuck in bugs is reduced by a considerable amount. But the disadvantages of native mobile app development far outweigh its advantages.

Although both app development approaches are pretty famous and have an incredible number of consumers using them, hybrid mobile app development is gaining momentum these days.

One of the significant disadvantages of native mobile app development is that it can be used on a single platform. Suppose website development and design companies want their application to function on different operating systems. In that case, they should create separate apps for both, which is a time and effort-consuming process. Most of the time, clients are forced to hire special teams for each app development.

Although in the case of native mobile app development, web developers get less stuck in bugs as cross-platform tools(Cordova or Xamarin) are not used by them. But the overall process is quite tricky and time taking as well. The labor required for the same is also more. The expense incurred on the maintenance and support service is also high.

Native applications can be used after they are downloaded from specific app stores. The downloading process is quite complex, with steps involved, such as looking for the application over the app store, reading and accepting the terms and conditions, and allowing or denying some permission related to the device. Time is money, and most users only have a little time to go through such a lengthy process, which is why around 20% of the users are lost on each new step.

Even though native apps are functional offline and are more secure, they are still not for companies and startups which operate on a limited budget. Moreover, developing separate apps for various platforms will add even more pressure on their already tight budgets. Therefore native mobile app development is not preferred by companies in the initial phases of development.

Due to the disadvantages and problems faced in the case of native app development, hybrid app development is gaining preference. As a result, app-developing companies increasingly take it up.

Hybrid mobile apps are functional on different platforms. For example, an app can be developed for a forum, and if you want to use it on another platform, only a few minute changes are required, unlike native app development in which a whole new one is needed to be created.

In the case of native apps, whenever there is a change in the operating systems, users are supposed to change their mobile phones to get the updated version which is very costly and frustrating at the same time. A hybrid app overcomes this drawback and uses just the software maintenance support that software agencies provide.

Since native apps function on a single operating system, they are less flexible and do not integrate with other apps easily. On the other hand, hybrid mobile apps get associated with the mobile's system environment and blend easily with other apps without much friction.

As a single codebase is used in developing hybrid mobile apps, their development takes only half the time required to create a native app. Furthermore, since a single hybrid application serves the purpose and separate applications are not necessary, the development cost is also less than that of native applications. As fewer web developers are sufficient, this reduces the cost and makes hybrid apps more economical.

Offline support is one of the most important advantages of hybrid apps. It is very convenient for users to use these apps while traveling or to face issues like unstable network connectivity. The data gets stored locally. Although the users cannot access real-time data, they can still access previously loaded data.

As we all are aware, almost every economy is moving towards digitization. There are apps even for the simplest of tasks, such as purchasing groceries, making schedules, etc. More and more entrepreneurs understand the importance of having an online setup or a business-based app that can provide all the information related to the products or services offered to the target consumers. Therefore they prefer mobile apps to expand their reach. In this process, hybrid app development has the edge over native app development due to its numerous benefits and convenience to companies and end users.

How Can Software Development Help Your Business Cope with Crises?